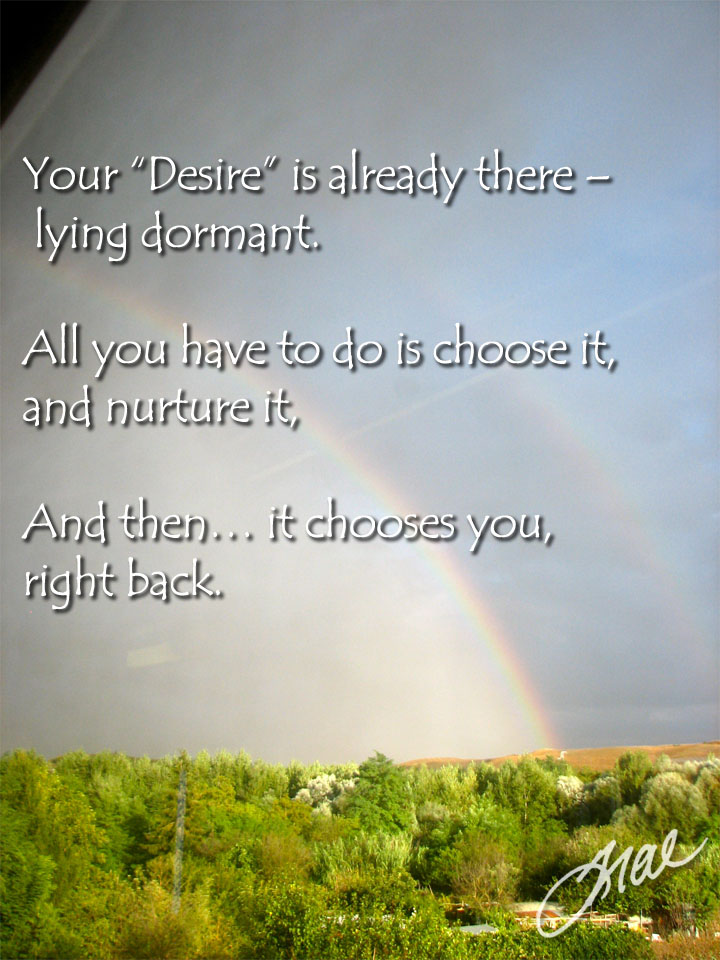 We’ve all experienced it…

No matter how well intentioned,

no matter how much we’ve changed or how evolved we are,
… or how far we have come.

We’ve all experienced times when we’ve reacted to the word or feelings of “desire”
in ways which are less than life-affirming.

You know what I’m talking about.

It’s like deep down in our subconscious
there are definitions or associations to the word, or its meaning
which are getting in our way,
which are keeping us from truly embracing what could be.

Yet when moving into our personal and professional growth,
and moving more into making a difference in our world,
what are we asked to do?
Better yet, who are we called to be?

Of what it means,
what it truly means

The “I have a dream…” speech
that will echo for eternity,
has powerful words
which still play softly in my ears.

MLK calls upon his audience then, and even today, to respond to
“the fierce urgency of now”

Reflecting on the Blogging, the Tweeting, and the online conversations
I am now giving myself permission to participate in,

Conversations which are crossing our borders and our industries,
our sectors and communities,
and crossing the languages – of cultures, hearts and minds

… all just less than 50 years later

And I wonder…
what would MLK say today?

I Trae, have a dream…

And when I truly tapped in to the truth
that achieving that dream meant engaging my “desire”…
for myself,
for those I love,
and for the causes I care for,

It was then, and only then,
that I finally “got it”…

It came to me when I revisited an old,
turn of the century definition, of “desire”.

I’d blown past it (or maybe I should say “through it”) over and over,
reading it, and re-reading it, and hearing it repeatedly for almost a decade,
without truly seeing it…
until then… when it hit me.

I remember the moment vividly.
I was driving to Clearwater Beach, Florida
for some sunset meditation in December 2008…

Listening to my audio-book CD’s in the car,
it was like I was hearing this definition for the first time.

So much so, I had to pull over and stop.

It was then, in that moment,
On the side of the freeway, through both laughter and tears,
That what was old, became new.

And in that same moment, everything changed.

So I’m inviting you now, to take a deep breath.
To give gratitude, and to give yourself permission
to release those previous associations and definitions…
– the ones about “desire” that, while they helped to make you who you are,
are no longer serving you.

And with the next breath, prepare yourself…
Give yourself permission to carefully read
this next definition that I’m about to share.

Allow it to seed into your being
… and to take root.

Take a deep breath again… and here it is…

“Every desire
is the effort of an unexpressed possibility to come into action.
It is power seeking to manifest, which causes desire…
It is life, seeking fuller expression.”
Wallace D. Wattles – “The Science of Getting Rich”

Now how does THAT feel?
I mean really?

And if it’s not sinking in yet, don’t worry…
I encourage you to read it again, and again, and give it time.

And for those of you who are getting “just a little something” at this time…
Doesn’t that definition just change
… Everything?

All I know is that for me, it did.
And still does.

Since then, these words have become the gauge by which I weigh everything.
Everything I have ever previously believed or thought… and now…
even DESIRED.

And now,
It can be that way for you too…

Because now, your “desire”,
instead of just coming from somewhere inside you,
… and being wishful thinking
… or being experienced as longing or from a place of scarcity,
gets to begin to be associated with something… else…

Your DESIRE now, becomes a SIGNAL for what truly is…
possible

It is as yet, an unexpressed possibility
which your Higher Power,
whether you subscribe to Science, Religion, or Philosophy,
has for YOU.

What do you think of that?

In the past, we may have thought,
that because we have “desire” for something,

Because there have been definitions that have undergirded
years, generations, and centuries of meaning for “desire”
in ways that have equally been… well, less than life-affirming…

Well not any more.

Because the truth is, if the desire exists in you,
its your Higher Power reaching toward you,
to let you know you have it within you, and…
… you have, the power to do it.

Just like the seed has the power to become the tree.

It needs to draw new elements in to it,
and transform many times and in many ways on its way there,
but the blueprint, the DNA of the “desire” is already there – lying dormant.

All you have to do is choose it, and nurture it,
And then, it chooses you, right back.

What does that knowledge do for your belief system(s)??

Wouldn’t it be fun to co-create what’s possible, with the Universe?
To participate with your Higher Power in such a way
as what will happen
is that the glass you desire to be filled
will be filled to overflowing instead of offering just a taste?

So I invite you to take another deep breath in, and out…
and in and out again…
And give yourself permission to engage with this definition

Whether it’s new for you, or a pleasant reminder.
Give yourself permission to let it “perk”, let it incubate…
And fuel you to the point where you cannot help but take action,
in one small way,
in any way,
today.

Categories: “Being” in the Signals, 6 Acts of Receiving, Co-creating Community, My Inspiration(s), Thoughts & Reflections