Courage Below the Surface…. 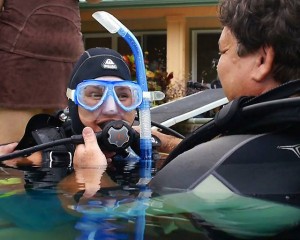 WHAT a journey….  Almost 2 years after that fateful day for Pauline Victoria Aughe, in the food fair of a shopping mall in Hilo Hawaii in the fall/winter of 2011… and now, here we are…

Well, on November 15th, it really happened.  And WOW… What an honour to witness it!  Especially when we were SO close to NOT seeing it happen.

Pauline had been having abdominal issues late Spring, and over the Summer… I had already booked my flights to come to Hawaii for the dive, and I remember Pauline calling me in September, to let me know that the Doctor might not let her dive.

But after a lengthly conversation about expectations… we agreed that I should come out anyway, and that the two of us would jointly hold intention and believe that maybe, just maybe the dive might not be the reason for me coming… Granted, we didn’t want that to be the case, but we mutually agreed that we would stay open that the dive might still happen.

And… quite literally, we were beside the phone, THE SAME DAY as the dive had been scheduled… still waiting for authorization from the Doctor, that Pauline could do the dive.  Wow…

Needless to say, from the moment of the phone call, through to the end of the dive later that day, it was an amazing experience of watching this woman who has my utmost respect, demonstrate the true meaning of courage — “feel the fear and do it anyway”.

I am completely in awe… and so, SO honoured to witness a pivotal moment in her history.

PS.  For those who want to read more… I’ve added into this post the Article that came out later in January in the Hilo Newspaper the following year – Enjoy!

“Courage Below the Surface”

Pauline Aughe, a 38-year-old Pahoa resident who was born a quadriplegic, said she’s always been one to test the limits.

“I’ve always liked to push the envelope,” she said. “Any time you cross the line of the unknown and are faced with a little bit of fear or a lot of fear and you can accomplish something, it’s another step of empowerment and it’s like ‘OK. Now what can I do?’”

Learning to scuba dive was an accomplishment she never dreamed of pursuing.

“There’s just some things you’re never going to be able to experience, and in order not to be upset or depressed, you don’t focus on those things,” she said.

“I was sitting in the food court and a gentleman came up and asked if he could talk to me,” she said. “He proceeded to ask if I’d be interested in scuba diving. It wasn’t on my radar of possibilities.”

“It’s something she’d never done in her life,” Cornwell recalled. “It’s like someone coming up to you saying the shuttle is taking off tomorrow, you want to come aboard?”

At the time of the proposition Cornwell had instructed only able-bodied divers and had to receive specialized training from a Handicap Scuba Association instructor in order to properly train Aughe.

Aughe said she prepared for the dive by swimming with a friend at the Pahoa pool until the two would meet Nov. 15 at her neighbors’ home in Paradise Park for her first-ever scuba diving lesson.

The training started with a written test followed by what Aughe described as a challenging skills test underwater.

“First thing that Kevin did is explain that we couldn’t talk under water and to blink once for ‘yes’ and twice for ‘no’. Communication could only go one way, and that’s very different than what other scuba divers go through,” she said.

Aughe said at one point during the skills test, she “completely panicked.”

“Everything was so counter-intuitive to what you’re supposed to be doing. It’s just so unnatural,” she said. “Logic goes completely out the window. I panicked and he brought me up to the surface. My nose stuffed up all of a sudden. Wires crossed in my brain and I had to think about it again. I’m very lucky. I get to appreciate a lot of different things and have a lot of gratitude for what I can do and try not to take things for granted, and at that moment, I realized I took breathing for granted.”

“She put her entire life and well-being in my hands; it scared us both,” Cornwell said about the emotional moment.

But after Aughe took a deep breath and looked around, she became determined to finish what they started.

“All these people have come together at this point to help me experience this and if it doesn’t happen it’s all on me and I felt very angry at myself for not getting it,” she said.

Putting her fears aside, she gave Cornwell and his team the go ahead.

After making it through the underwater skills test, Aughe said she felt “unbelievably peaceful.”

Aughe conquered the pool and has plans to go on a tour dive in the ocean once she gets clearance from her doctor. In the meantime, Cornwell is working on advancing his handicap scuba training certification, which will allow him to certify first-time handicap divers.

“This is the start of what we expect to be a long-term thing. This is a chance to offer veterans and handicaps in our communities a chance to scuba dive and to give them what they already own,” he said. “This is our island, the ocean belongs to us, the people. And for people who can’t access it for whatever reason, let’s fix that and get that right.”

Currently, Hilo Ocean Adventures has the only disabled scuba program on the East Side of the island.

Aughe encourages everyone to attempt the daring task, as well.

Categories: “Being” in the Signals, 6 Acts of Receiving, I Give Myself Permission, My Inspiration(s)

Next post: The 6 Acts of Receiving “PlayBook” – is Named a FINALIST in the Motivational Category of the 2014 Next Generation Indie Book Awards